The Sun Came Out … 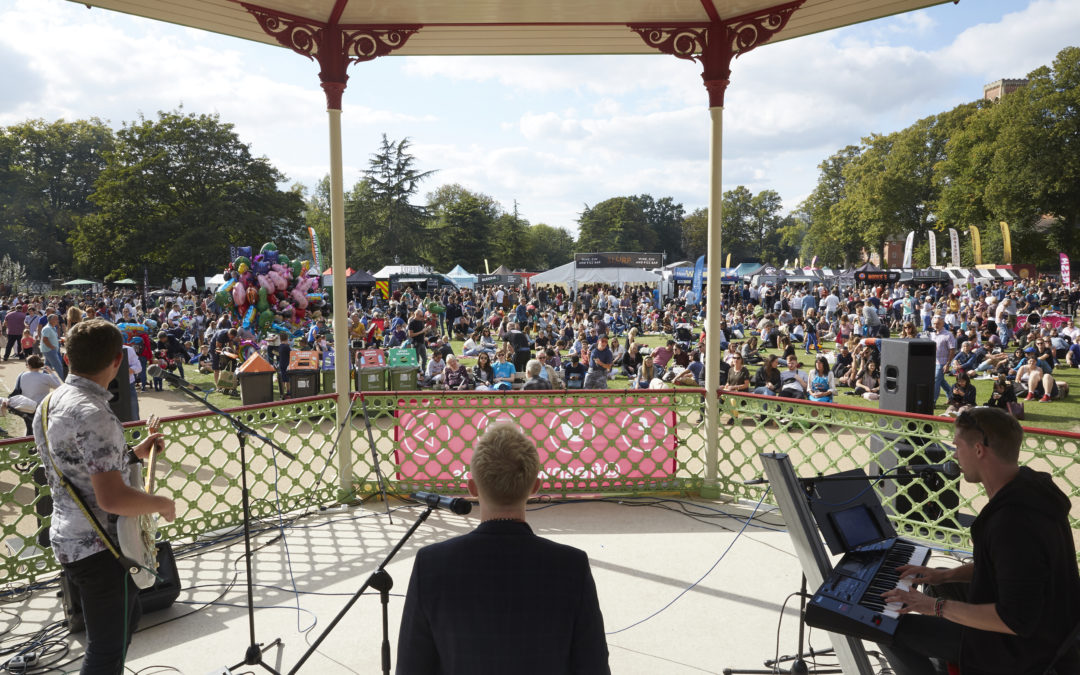 Thousands of visitors turned out for the Leamington Food Festival which served up a weekend of foodie fun in the Pump Room Gardens.

Two days of sunny weather, more than 130 food producers and traders, live music, demonstrations and a kids’ cookery school meant huge numbers of people turned out to the event which is organised by BID Leamington with the support of local businesses.

On the Live Kitchen the excitement was tangible as Sean Hughes went one better than last year to land the crown as the Aubrey Allen ‘Home Cook of the Year’ at the Festival.

Sean won by a single point after finishing as runner-up in 2018, the narrowest winning margin in the six-year history of the competition which is the centrepiece of the festival.

The Home Cook of the Year is one of the highlights of the weekend, and Hughes found a novel way to try to escape the stress of producing three courses of restaurant-quality food in under two hours.

The project manager, who lives in Kineton, said: “I did the Wolf Run yesterday but to be honest I just kept worrying about my chocolate fondant all the way round the run.

“I was really pleased with the way it went but I was not sure I had won it until the results were read out.”

Sean, who was cheered on by wife Lou and six-year-old son Jacob, urged others to enter the competition in 12 months’ time.

His main course of beef was described by Clive Fretwell – who had worked for Raymond Blanc in senior roles for almost 30 years – as “perfection on a plate”.

The festival, which is in its 12th year, attracts around 25,000 local people and visitors to the town.

As well as featuring many local favourites, the festival welcomed a number of new businesses including the Cellar Club, the Clarendon, Bar & Block, the Steamhouse and Hart & Co with a fabulous beach themed stall.

Alison Shaw, BID Leamington project manager and festival organiser, said: “We could not have been more pleased this year as the sun shone for most of the weekend which meant there was a great turn out for our traders, exhibitors and demonstrators.

“The festival not only highlights many of the fantastic food and drink businesses we have in our area, but it’s also a great opportunity for people to visit and enjoy the town centre and we spoke to people from all over the country.

“Running for the second year, we offered spot prizes and the opportunity to win a £150 Food Hamper filled with local treats to those travelling to the festival by train and there was a great take-up which was really pleasing.

“We also have great support from Leamington businesses and hugely appreciate the support we get from a wide range of staff and volunteers who help make the event such a resounding success.”

Food Festival: Pictured, the popular band ‘Chasing Deer’ made up of members Rob, Peter and Adam entertaining the crowds.