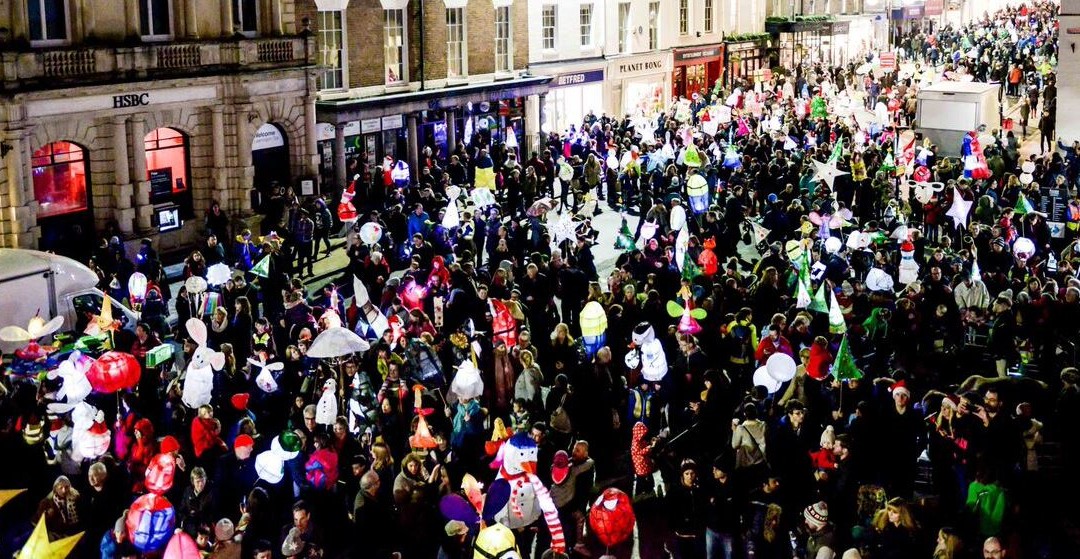 More than 2,500 took part – the biggest turnout in the event’s five year history – with over 1,000 handmade lanterns paraded from the Pump Rooms to the Town Hall.

Leading the lanterns was Snowey the Friendly Giant, designed by five-year-old Olivia Beard who won a competition to create the awe-inspiring focal point of the parade.

Snowey, the largest lantern in the parade, was accompanied by two stilt-walking festive snowflakes, provided by local company Vortex Creates.

Olivia’s design was built at the Spa Centre – by Olivia with the help of community artist Fran Godwin, from the Community Arts Workshop – while all other lanterns were designed and made by local families who attended lantern-making workshops in the run-up to the parade.

Stephanie Kerr, from BID Leamington, which organises the lantern parade, said: “This year’s event has been by far our most spectacular yet.

“We had a wonderful turnout and it was absolutely incredible watching everybody come together to exhibit their astonishing creations and make it into such a brilliant community event.

“The lantern parade is a free, family-orientated event that attracts people of all ages and backgrounds each year, and with this in mind we wanted to tap into that community spirit by holding a Christmas toy appeal which collects toys for local children.

“As always the appeal was very well supported and many generous donations were made.

“Huge thanks must go to all our dedicated volunteers who help at the workshops and parade as well as CJ Events and Pete Smith from Tandy UK who always go the extra mile.

“We’re also grateful to Leamington Spa Art Gallery and Museum for hosting lantern workshops for toddlers as well as town centre businesses that continue to support the event and of course, all those who attended on the night.”

For more pictures please see the article in the Leamington Observer