Strong Support for Another Five Years! 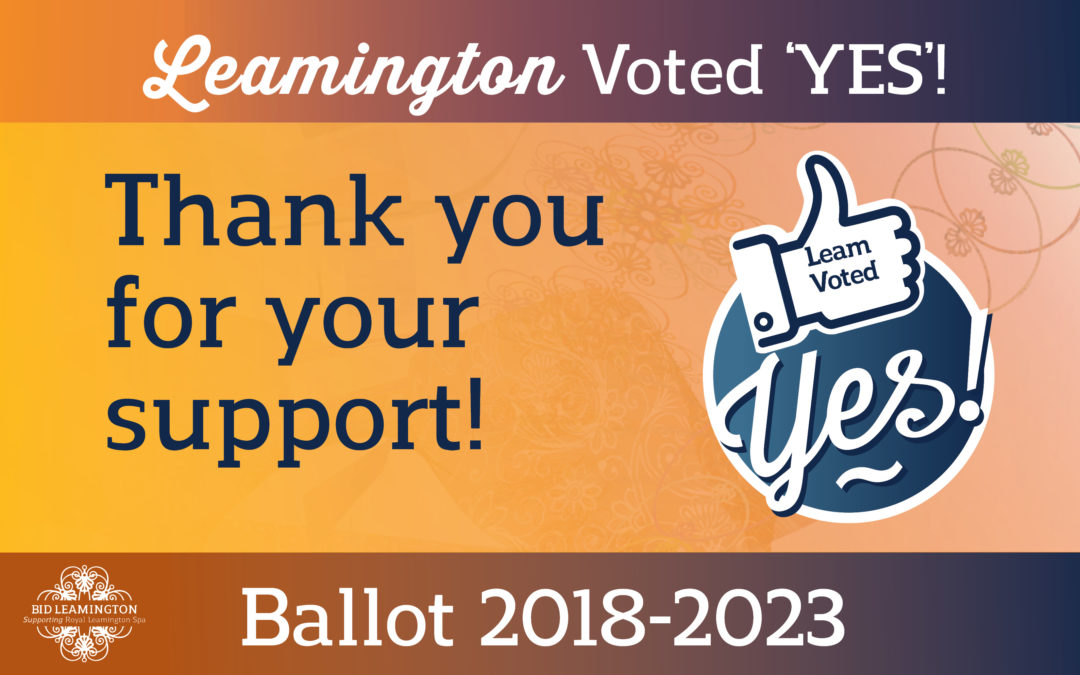 Businesses have overwhelmingly backed the Business Improvement District (BID) for a third term to continue the partnership’s work in helping to ensure the town centre thrives.

The ‘yes’ vote for BID Leamington means businesses will still be represented on key issues, and the town centre will benefit from more than £1.9 million of investment over the next five years.

The result for BID Leamington was announced today (Wednesday, March 29) following a month-long postal ballot of businesses eligible to vote.

Stephanie Kerr, executive director of BID Leamington, said: “We very much appreciate the trust placed in us by those who have voted and are pleased that BID Leamington has been given the backing of the businesses to build on our achievements over the last five years.

“The result provides a strong mandate and holds itself in high accord across the industry as well.

“Faced with challenges greater than ever before, the business community has recognised the value of retaining the BID as their collective voice on important issues such as development and parking, and in helping to secure a vibrant and successful town centre.

“We put together a detailed plan setting out our strategy for the next five years and with their endorsement, we will now start work on implementing those measures for the benefit of business and the town as a whole.”

The strategy will focus on addressing key priorities which include attracting footfall, car parking, out-of-town and online competition, ensuring a strong retail economy and balancing a mix of outlets.

It will also build on the BID’s strong digital representation of businesses via the Royal Leamington Spa and Taste Leamington websites, and social media platforms which have 20,000 followers.

Businesses first voted to establish BID Leamington in 2008 and have now twice voted to renew the award-winning partnership, which is recognised as one of the most creative and innovative small BIDS in the UK.

All retail and leisure businesses within a set boundary and with a rateable value of more than £15,000 pay an annual levy for the non-profit making organisation.

The levy and additional income generated by the BID contributes to the Christmas lights, and funds the hanging baskets as well as major events and promotions in the town like the Leamington Food and Drink Festival, Lantern Parade, Car Parking Angels, Pumpkin Path and Love Leam.

Sarah Horne, chair of BID Leamington and owner of Sarah Horne Flowers, said: “We would like to thank the local business community for its continued support.

“We know the business environment is very challenging so having the collective investment, support, representation and knowledge that BID Leamington provides is essential to remain competitive and we are looking forward to delivering on our plans over the next five years.”

The ballot was conducted entirely by post on behalf of the Ballot Holder, Chris Elliot, who is the Warwick District Council, Chief Executive, by the Independent Scrutineer, Electoral Reform Services (ERS) of 33 Clarendon Road, London N8 0NW. The official declaration of the result is here. The ERS declaration can be downloaded here. For more information please contact the BID team on 01926 470634 or email info@bidleamington2022.mystagingwebsite.com.