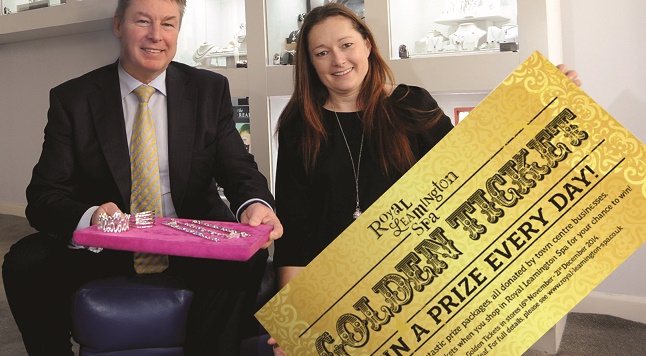 As shoppers start searching for that perfect Christmas gift, Leamington Spa is beginning its quest to find the town centre’s first-ever Retail Hero of The Year.

The town is already gearing up for the festivities with the Christmas lights switch-on event and the launch of this year’s award-winning Golden Ticket Prize Draw taking place on Sunday, November 16.

But while the fourth annual Golden Ticket Prize Draw will reward loyal shoppers for their custom, a new search is underway this year to recognise those on the other side of the counter for going above and beyond the call of duty in the name of customer service.

BID Leamington is organising the Retail Hero of the Year award and is now calling on business owners and managers at shopping outlets within the town centre to nominate the person they feel deserving of the title by Sunday, November 30.

Special recognition will be given to all those nominated and the overall winner will receive a prize package of Christmas goodies and be invited to join BID Leamington in awarding this year’s Golden Ticket grand prizes on Monday, December 22.

Stephanie Kerr, executive director of BID Leamington, said: “Leamington Spa is renowned for its fantastic mix of independent stores and major high-street names, and prides itself on brilliant customer service.

“An integral part of that offering is the commitment and enthusiasm of the town centre’s retail staff and we felt there was no better time to recognise that than during the busy festive period.
“We are looking for someone who has gone above and beyond the call of duty – they might have personally helped a customer in trouble, sourced a product from the other side of the world or just been a constantly friendly face.
”While every town needs a good range of retail, the service and welcome you receive are often the things that leave a lasting impression.”

More than 6,500 entries were received in 2013 and this year’s total prize value stands at £4,000 with top prizes including £500 to spend on jewellery from Peter Stephan Jewellers in Warwick Street, a £400 town centre shopping spree and a limited edition print from Whitewall Gallery in Regent Street.

Prizes will be awarded for every day from Monday, December 1 to Thursday, December 25. The final three will be grand prizes to be handed out on December 22.

Stephanie added: “The Golden Ticket Prize Draw has been a great success over the past three years and with our latest line-up of participating retailers and the prizes they have donated, this year looks like being the best yet.”

The town centre is open every Thursday for late night shopping in the lead up to Christmas from Thursday, November 20 to Thursday, December 18 with free parking from 6pm in the Royal Priors (P4).