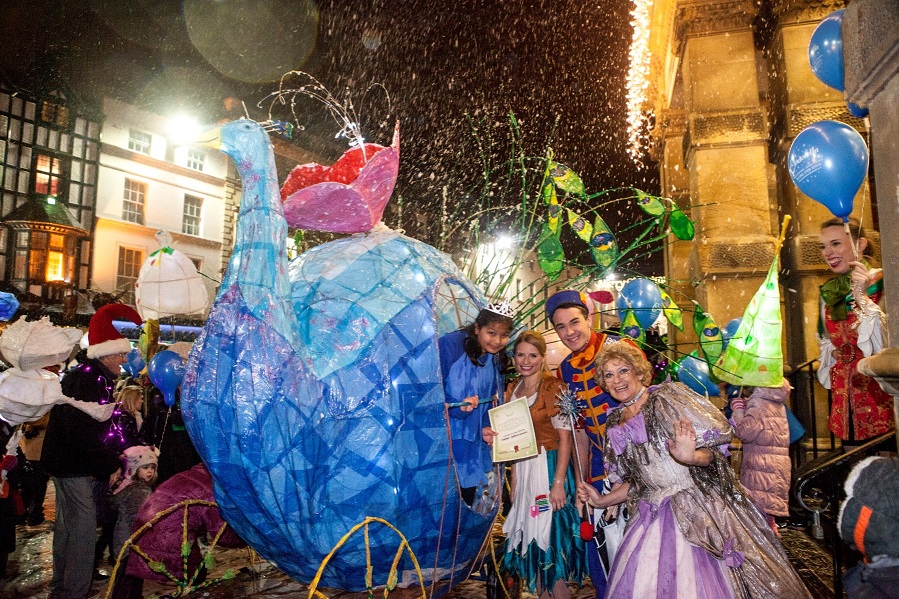 This year’s Leamington Lantern Parade was once again a spectacular sight and the highlight was a stunning ‘Peacock Carriage’ designed by a local schoolgirl.

Nine-year-old Rathura Kavuru won a competition, organised by the Royal Spa Centre in partnership with BID Leamington, to create the stunning focal point of the parade now in its fourth year.

As a wonderful twist, the Royal Priors Shopping Centre in Leamington Spa will once again be home to a giant peacock as the carriage which led the parade will be on display there until Christmas.

The sight of the carriage will bring back memories of the eye-catching peacock clock which once sat in front of a huge painting of Warwick Castle in the shopping centre.

Rathura’s design was brought to life during lantern making workshops hosted at the Royal Spa Centre, Family Tree and Warwickshire College’s Leamington campus in the run-up to the parade. The peacock carriage was built over three weeks by community artist Fran Godwin, from the Community Arts Workshop, and celebrates the Cinderella pantomime at the Royal Spa Centre.

Fran said: “Once again the lantern workshops and parade have proved to be incredibly creative and popular – bringing together so many people to make so many lovely lanterns! “I really enjoyed making the giant peacock carriage and hope that this is the first of many large lantern sculptures we’ll see in the parade.”

Stephanie Kerr, from BID Leamington, which organises the lantern parade, said: “Around 500 people braved the elements to join in this year’s Leamington Lantern Parade. “There was a beautiful string of lanterns of all shapes, sizes and designs surrounding the Royal Pump Rooms that then led into the town and culminated around the Tree of Lights at the Town Hall with Christmas carols, real reindeer and a stilt-waking Father Christmas. “It was yet again a fantastic community event and huge thanks to CJ Events, the local police, Warwick District Council and all the many volunteers who gave up their time to make it such a great success.”

Jo Lewis, from the Royal Spa Centre, said: “We were overwhelmed at the level of creativity and imagination that went into the entries for our lantern competition this year. “To see Rathura’s face light up when she was paraded through Leamington in her giant peacock carriage was just magical. We are already looking forward to next year’s competition for Jack & the Beanstalk.”