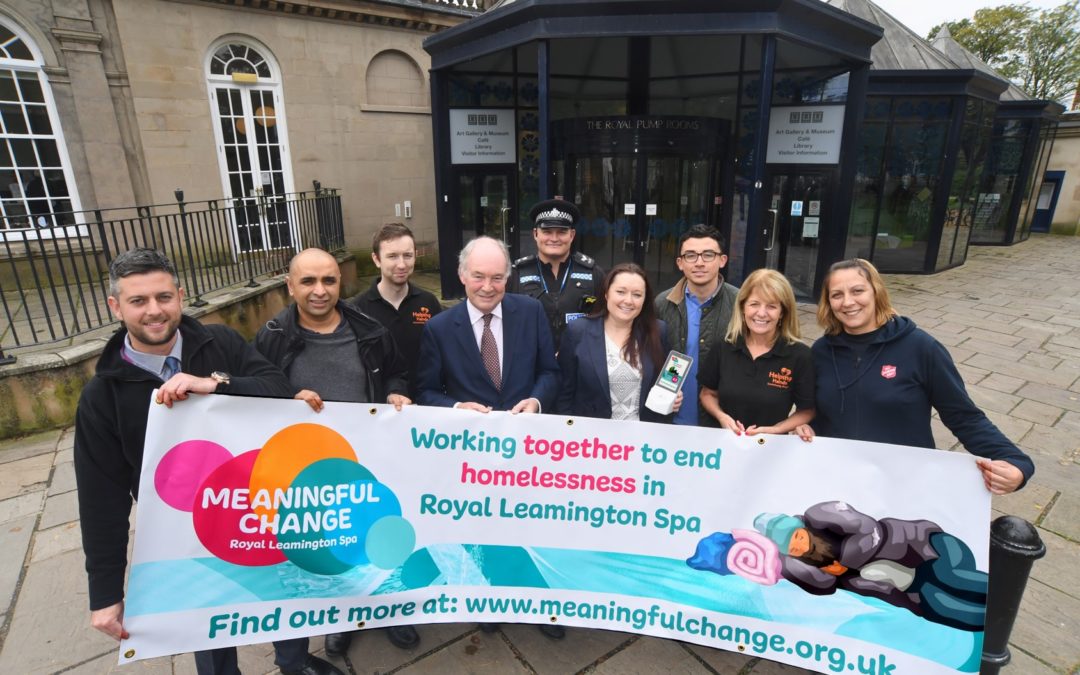 A ground-breaking initiative in Warwickshire to enable local communities to make a bigger impact on helping the homeless in their towns has been launched in Leamington.

Local charities and agencies working with the homeless and those at risk of being homeless in both towns have joined forces in a campaign called Meaningful Change, which aims to make more of a difference by providing a central focus for the public to pledge support. The campaign aims to make people more aware of the support services available in their towns, and how they can best help them by donating and volunteering.

Meaningful Change has been made possible with funding from the Warwickshire Police and Crime Commissioner, and Leamington and Stratford have worked together over the last year to devise the campaign and then tailor it to the specific needs of each town. Leamington and Stratford will operate their own campaigns, with individual websites providing information and an online platform for donations.

Philip Seccombe, Warwickshire Police and Crime Commissioner, said: “Meaningful Change provides an easy platform for people to help support local charities working with people who are homeless or at risk of being homeless so that they get the right help and can avoid falling into the criminal justice system. It will also help the wider community understand the support that is available to tackle homelessness and how they can help through the donation of time, money or items.”

BID Leamington has played a key role in developing Meaningful Change Leamington, alongside local charities and Warwick District Council. In Leamington, a collective giving pot has been established for funds to be distributed between local charities to direct aid to those most in need. The town’s first fundraising unit for contactless donations has been installed at the Visitor Information Centre and another is due to be installed in the Royal Priors Shopping Centre this Christmas.

Stephanie Kerr, executive director of BID Leamington, said: “The number of vulnerable people facing a range of challenges around the UK is increasing and this is no different locally.

“In Leamington, we are fortunate to have a wide range of around-the-clock support services and the work they do is incredible, but they need our support to help those people that the public may see sleeping rough, begging, or dealing with issues that are not so visible.

“As custodians of our town centre, BID Leamington is very much aware that businesses and their customers have genuine concerns about homelessness and want to know how they can best help. Meaningful Change will enable us all to make a bigger impact.”

“We are pleased to be supporting the Meaningful Change initiative which is a welcome addition to the range of support services that our Housing and Safer Communities team provide to the most vulnerable in our community.”

Funding that is raised through Meaningful Change Leamington, will be distributed between those organisations which have nominated specific areas where they wish to focus this financial support.

For more information, including a full list of charities and statutory support agencies involved in Meaningful Change Leamington, visit www.meaningfulchange.org.uk.