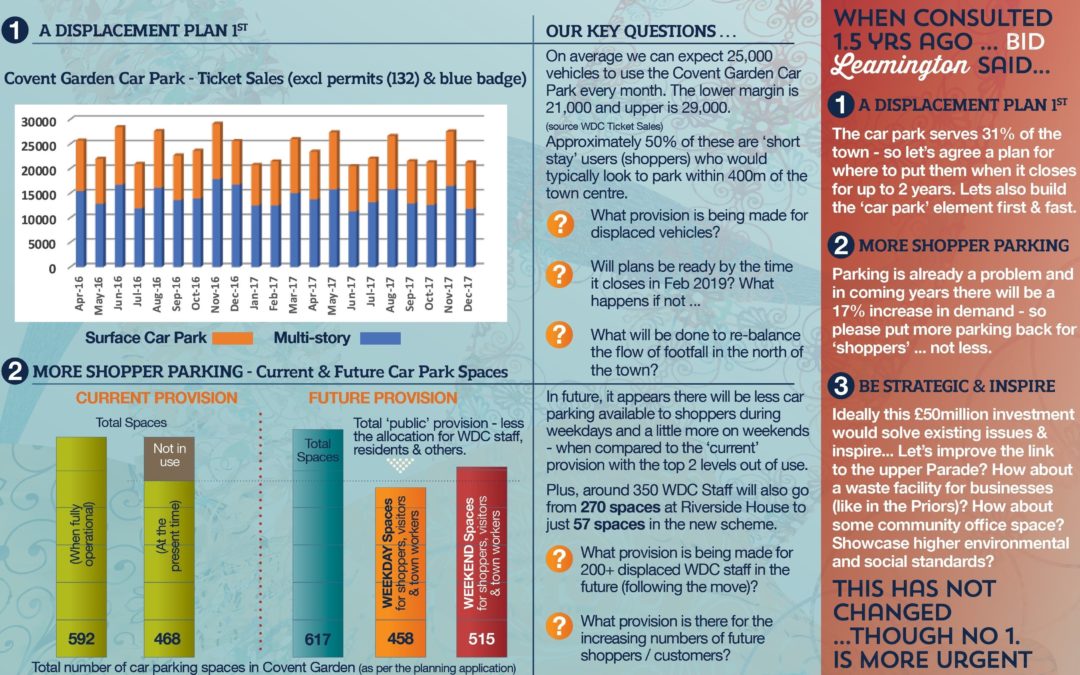 Much is still to be done before a robust strategy is put in place to cover the temporary loss of one of Leamington town centre’s busiest car parks.

This is the view of BID Leamington, in response to an update from Warwick District Council on its strategy to create enough parking spaces to be in place for the 20-month period of when the 468-space Covent Garden carpark closes to be replaced by a new car park, apartments and local Local Authority headquarters on the site.

The report, which was approved by the Council Executive, follows a very well attended public meeting which was held on the 19th of June. Approximately 150 people, around 60 of which were business owners filled the Spa Centre to question Council Officers on the scheme. Among other things the questions focused on five key questions relating to car park displacement, loss of footfall, timing and future provision set out in the graphic below.

Following the 2.5 hour long meeting it was agreed that further engagement directly with the business community was urgently needed, as there were many questions that remained unanswered. It was also agreed that specialist car parking expertise is engaged to review plans.

One month on, BID Leamington are pleased to see that a number of our suggestions have been agreed in the July 25th, Executive Report. This includes funding towards a communications plan and the engagement of specialist expertise to review the WDC’s car park displacement plans.

The review, being undertaken by a specialist parking consultancy which we helped select, started this week and will look at the impact of the closure of Covent Garden Car Park, what is proposed and recommend further measures to minimise disruption and re-balance footfall in the north of the town centre. We anticipate further recommendations may need to go forward to Officers and Members following this work.

Engagement with Warwick District Council is also ongoing. We have further meetings planned in early August, with a focus on addressing the concerns of businesses in Warwick Street who will be among those impacted by the loss of footfall when the car park closes. There are also calls for a follow-up ‘business meeting’ open to all local businesses to take place when WDC plans are clearer.

We are mindful that the proposed closure date of Covent Garden Car Park of January 2019 is less than six months away and there is still a lot to do. Much of the proposed ‘additional car parking’ needs planning permission to be built or in the case of Station Approach will not be ready until late 2019, so we are seeking reassurances that the Covent Garden Car Park will not be closed until an adequate plan is ready to be delivered.

The importance of this has also been confirmed by recent ‘Institute of Place Management’ (IPM) research which identifies ‘accessibility’ as among the top two criteria impacting high street vitality, the other being ‘footfall’. This means we need to welcome and deliver investment that puts these issues and local business interests at the heart of the conversation. 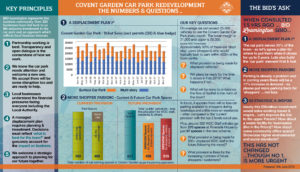