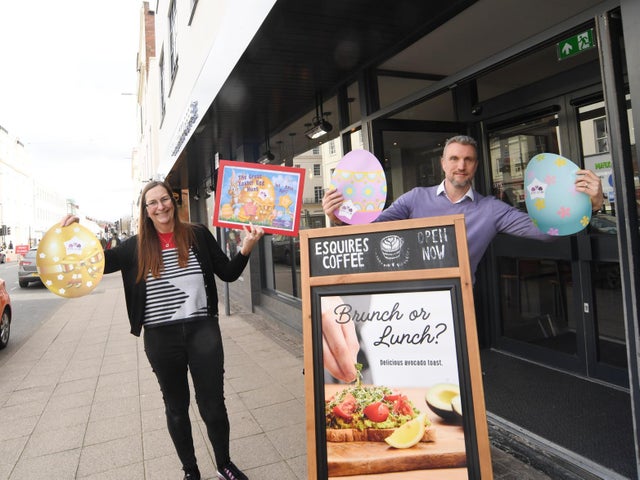 An Easter egg hunt in Leamington town centre this April is aiming to hatch a bit of fun while encouraging families to support their high street as lockdown restrictions ease.

Encompassing 50 shops, The Great Easter Egg Hunt will run from Thursday April 1 to Wednesday April 28 and will also introduce treasure hunters to some new businesses as well.

BID Leamington has organised two trails around the town centre where colourful eggs will be displayed in shop windows.

There are two ‘golden eggs’ to be found, one on each route. Once found, the treasure hunters just have to jot down the name of the shop onto the entry form to be entered into a grand prize draw to be in with a chance to win one of five £50 vouchers to be spent in Leamington Spa town centre shops.

There is also an adaptation of the trail online at www.loveleamington.com for those who cannot make it into the town centre.

The Great Easter Egg Hunt coincides with the planned reopening of shops on April 12, and Alison Shaw, BID Project Manager at BID Leamington, hopes it will encourage people back into the town.

She said: “We wanted to spread a bit of Easter fun around Leamington and give families a reason to come back into the town and visit our fantastic shops.

“It’s a great way for people to explore the town again, visit a wide range of retailers and enjoy themselves after what’s been a tough year.

“We hope plenty of people give The Great Easter Egg Hunt a go, and we’re looking forward to seeing our shops welcome back their customers once again.”

Treasure hunters can also view artwork from youngsters who participated in the ‘I Love Leamington’ campaign organised jointly with Go Go Makers, who asked children to create a self-portrait inside a heart – including the words ‘I Love Leamington’.

Their pictures are now on display in a selection of shop windows until April 6, and will then be displayed in the Royal Priors Shopping Centre after April 12.

Alison added: “We’re delighted with what the young artists have created. Their work and the Great Easter Egg Hunt will both help to encourage people into town as our shops reopen.”

Entry forms for the Great Easter Egg Hunt can be downloaded online at www.loveleamington.com, can be picked up from the white unit on the Lower Mall of Royal Priors, or can be found in the Leamington Observer. Forms will also be available from shops once they have re-opened. A post box for posting entries will be located at Coffee Break on the Upper Mall of Royal Priors, or entries can be posted directly to BID Leamington.

Closing date for postal and online entries is Wednesday, April 28 and the winner will be notified by Wednesday, 5 May.

Further information can be found on www.loveleamington.com.