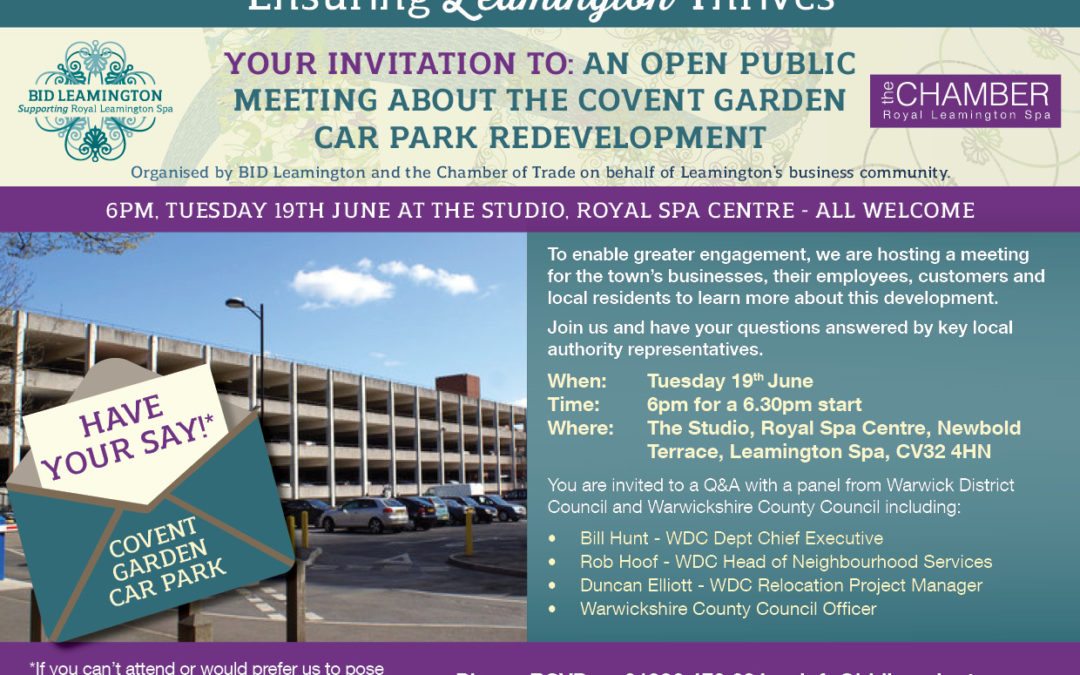 A public meeting is to be held on the high-profile redevelopment of Covent Garden Car Park in Leamington.

The event will give local businesses, employees, customers and residents the chance to put forward their questions on the development of new headquarters for Warwick District Council, new multi-storey car park and apartments on the site.

It is being jointly organised by BID Leamington and Leamington Chamber of Trade on behalf of the town’s business community and will take place at The Studio in the Royal Spa Centre on Tuesday, June 19, at 6pm.

It is hoped that the meeting will enable greater engagement and opportunity for the wider community to have their questions answered by key local authority representatives including Bill Hunt, deputy chief executive of Warwick District Council.

BID Leamington is concerned that insufficient provision has been made for the loss of parking and that the new multi-storey will not be able to meet increased demand from the new headquarters and apartments.

“As their collective voice, BID Leamington has been actively lobbying on the scheme for over a year, particularly in relation to the displacement plan for parking.

“As part of that, we met with Cllr Andrew Mobbs, leader of Warwick District Council, in early February when we set out the concerns of 200 businesses which included 27 emails that we had received from individual retailers.

“With around 25,000 vehicles per month affected, local businesses are worried that a shortage of parking spaces, within an acceptable distance, during the two-year development will deter shoppers and significantly diminish footfall particularly in the north of the town centre where businesses will also notice the loss in passing foot traffic.

“We are committed to working with Warwick District Council not only to improve parking in the long-term but to attract the right kind of investment to take the town forward.

“However, we feel that this needs to be delivered in a way that responsibly mitigates any disruption to businesses as the high street is already facing significant challenges.

“The public meeting will be an opportunity to hopefully have questions answered and we would urge businesses, and anyone in the local community with interest and concerns, to attend.”

Anyone who is unable to attend the meeting or would like a question posed on their behalf is invited to email info@bidleamington2022.mystagingwebsite.com

To view the plans for the development, please visit the Warwick District Council website by clicking here.

More details can also be found on the invitation by clicking on the images below. 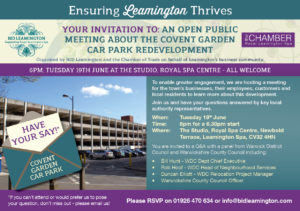 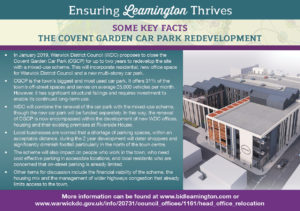