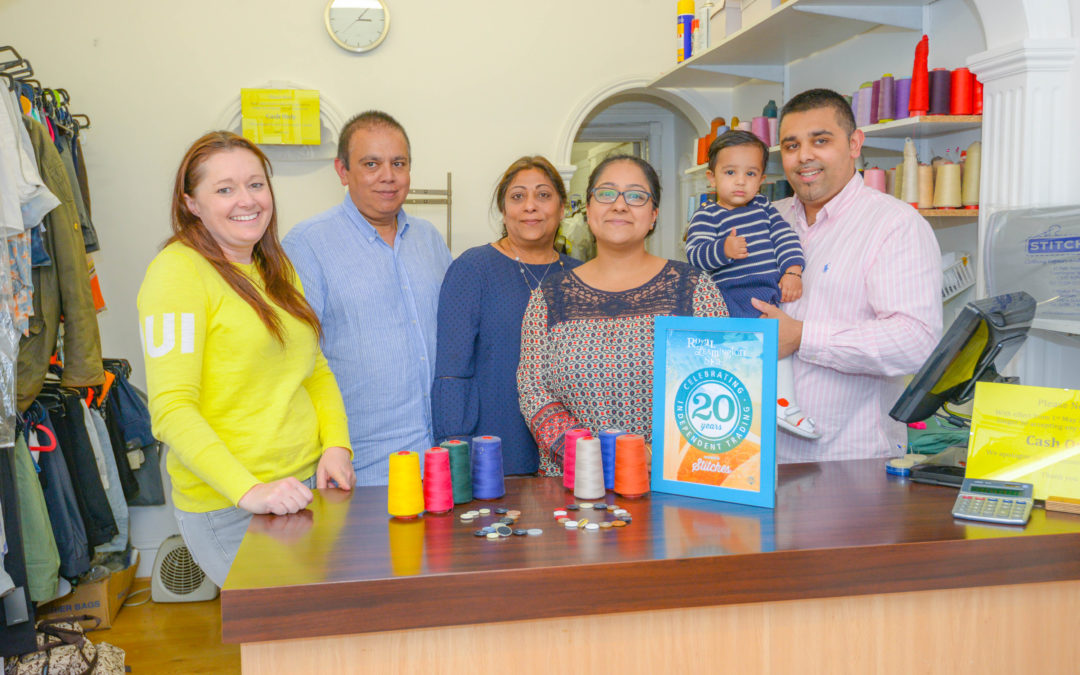 A clothing repairs and alterations business has sewn up 20 years of independent trading in Leamington.

Stitches is celebrating two decades in the town centre – and is the first to be recognised in a new initiative by BID Leamington to mark retail milestones.

Husband-and-wife Subhash and Arvinda Gohil, known as ‘Mr and Mrs Stitches’, moved up from London around 12 years ago to take over the shop in Park Street which was originally opened by three of her uncles, the Supeda brothers Naran, Kantilal and Naresh.

The business continued to be a family affair with their son Manesh and daughter Minal growing up behind the counter where they learnt the trade from their parents.

It has expanded over the years and they opened a branch in Banbury seven years ago which is now run by Manesh and his wife Shilpa.

Subhash said: “Originally the shop was run by the three brothers who had been in the tailoring business in Leicester for 40 years.  They wanted to go into clothing alterations and visited Leamington and saw the opportunity here.

“At first they opened on Regent Street but were only there six months as Kantilal spotted this shop on Park Street.  They ran it together as a family for years until Naran and Kantilal decided to retire.  Naresh carried it on and then we took it over about 12 years ago to keep it in the family.”

The family prides itself on its quality, expertise, service and speed which it believes has resulted in a growing loyal customer base with some even known to have travelled from as far as London, Slough, Liverpool and Swindon.

Deborah Callaghan, who lives in Leamington, is one of the most long-standing, and regular, local patrons.

She said: “I have been going to Stitches since it first opened. I often re-design my clothes to get the right fit or to recycle old ones into a new style, and Subhash is able to undertake pretty much any challenge and with a professional finish.”

BID Leamington has presented Stitches with a certificate and window sticker to celebrate its anniversary, and now plans to recognise milestone years of other businesses.

Stephanie Kerr, executive director of BID Leamington, said: “It’s important to celebrate our businesses that have managed to stay on the high street for so long, particularly when competition is tough for both independents and national chains.

“Stitches is proud to have been independently trading in Leamington for 20 years and we are delighted that it is the first to be recognised in this new initiative to support and promote our town centre business community.”

Subhash added: “We would like to thank all our loyal customers for their support over 20 years.

“We look forward to many more years, with our son Manesh helping us to take the family business further forward and perhaps one day his daughter Nivah, who is not yet two, becoming the fourth generation.”

To mark the anniversary, Stitches is offering customers 20 per cent off repairs and alterations with a minimum spend of £20 at the Leamington store between July 18 and 21, and a celebratory glass of champagne.

PICTURE CAPTION: Pictured, from left to right, are Stephanie Kerr with Subhash and Arvinda Gohil, and Shilpa and Manesh Gohil with their daughter Nivah.