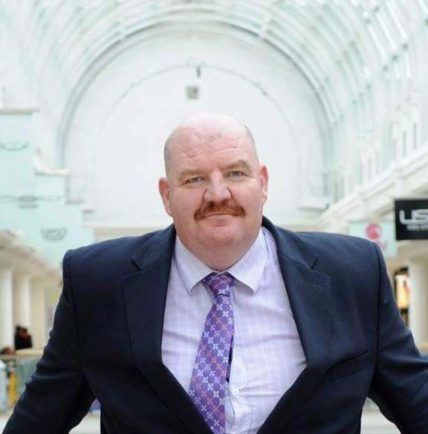 It is with great sadness the business community in Leamington town centre learnt of the sudden death of Royal Priors centre manager Gerry McManus.

The ‘gentle giant’ passed away on Monday (September 11) following a short illness. He was 53 years-old and is survived by his wife and two children.

Coventry City fan Gerry had a long and illustrious career at the Leamington centre, and many have spoken about what he meant to them.

Friend and colleague Stephanie Kerr, director of BID Leamington said “Gerry was a champion of all things good. He was hugely generous and a team player who believed that when we work together in a town, we all benefit.

“As one of the key instigators of BID Leamington over ten years ago, he served as a board member with passion, positivity and good sense throughout. This was among the things he was very proud of – in his words ‘working to make sure the jewel in Warwickshire’s crown is sparkling’.

“While always proud of his Coventry roots, his passion for Leamington was unbounded and he had that special quality of being someone people loved to work with. As a good friend and colleague he will be always remembered and greatly missed. Our thoughts are with his family and friends.”

Staff at the Royal Priors say they will miss their close friend and manager.

A spokesman said: “We can confirm that Gerry has died after a short illness and our thoughts are with his family and friends at this time.

“Gerry was a fantastic presence in the centre and he brought his wealth of knowledge, experience and enthusiasm to his job every day. He was a hugely popular, much-loved and well-respected figure across the Leamington community and will be sorely missed.”

Kelly Iles, Owner of Spangles American Diner – which until recently was based in the Priors opposite Wilkos – has also spoken of her shock.

She said: “Spangles would never of been created or existed had it not been for this man. He took a risk on the little independent nobody that was me, helped me start my diner, my dream and vision, believed in me and let me bend the rules a bit but not too much and guided me in business.

“Sometimes in life paths cross for a reason. Today I lost a true true friend and the world lost a truly great man. He has left a hole which will never be filled.”

And Leamington Chamber of Trade also voiced their sadness at the loss.

A spokesman said: “Gerry was a stalwart voluntary member of the Leamington Chamber Exec team and contributed greatly to the town’s well being for many years.

“As well as being a past Chair of the Chamber, Gerry’s significant involvement will be sorely missed in the Safer Neighbourhoods Forum, Town Centre Strategy Forum and Town Centre Management Partnership.

“The Chamber Exec team would like to extend our sincere condolences to his family and friends at this sad time.”

Gerry also was well-known in the American football community, having played the sport from the early 1980s.

He coached Coventry Jets between 2005 and 2011, seeing them win many games and move up through the championships.

A spokesman for the team said: “We are absolutely devastated to hear of the passing of former Jets coach and Midlands football legend Gerry McManus.

“A much respected person across all of Britball and one who helped us to become a championship winning team.

“Our thoughts and condolences to everyone associated with a truly wonderful man.”

He said: “What a great man and a great loss to friends, family and football. So very sad.

“Many game days and nights spent with this gentle giant. Wonderful footballer and outstanding football coach. Will be missed so much.”

A social media page has been set up for those who wish to pay tribute to Gerry. Sear ‘Remembering Gerry McManus’ on Facebook to find out more.