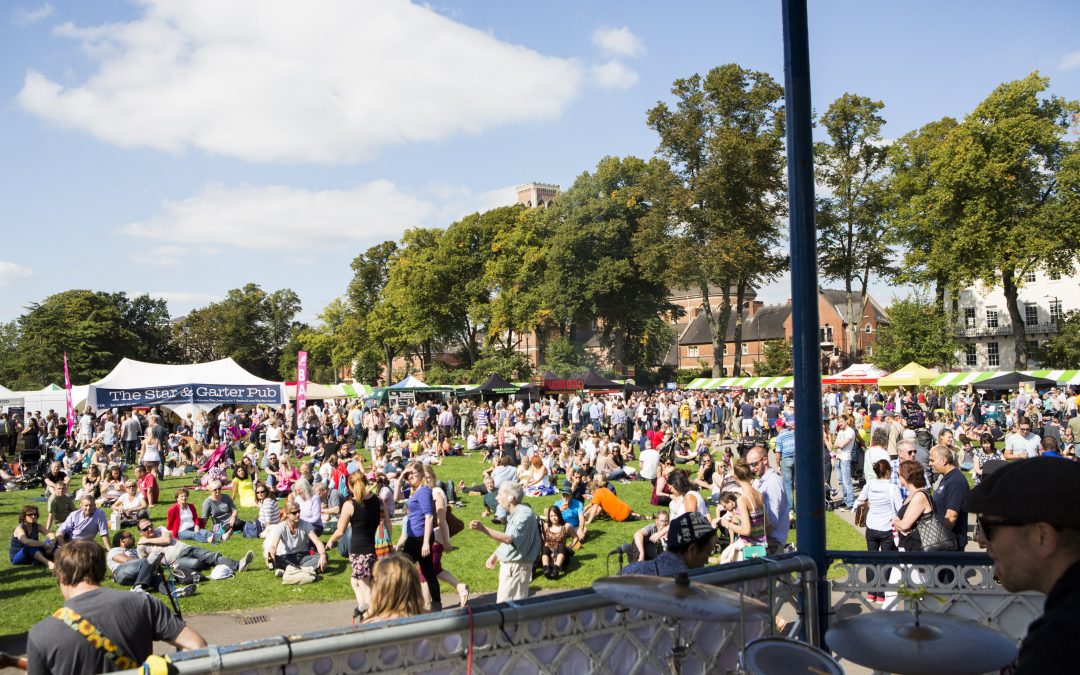 The hugely popular Royal Leamington Spa Food and Drink Festival is set for another record year after vendor space sold out in just ten days.

Returning for its ninth year, it will be taking place over the weekend of September 10 and 11 at the Royal Pump Room Gardens in the heart of Leamington’s town centre.

The FREE, family-friendly event, which is organised by BID Leamington, has attracted over 150 businesses who have signed up to tickle the taste buds of an anticipated 25,000 visitors from across the UK.

News of the festival has now spread far and wide, and this year there were a record number of applications from past exhibitors as well as many new ones from the town and surrounding area. Based on this visitors will find an exciting variety on offer, with exhibitors who will be displaying culinary skills and selling exotic cuisines from Italian breads and pastries to Indian street food, Zimbabwean preserves, alcoholic liqueurs and healthy smoothies.

Alison Shaw, of BID Leamington which organises the event, said: “The festival is now one of biggest event in the town’s calendar and we are proud that it is has an enviable reputation as one of the best autumn food festivals in the country, so it’s no surprise that it sold out in record time. “We are really pleased to see many of our favourite local traders return as well as some exciting new comers. It really is an exciting showcase of the wonderful diversity and quality of food and drink found in and around the town. Once again there also will be an exciting programme of demonstrations, cooking and baking competitions, live music and entertainment drawn from local talent in the area”.

Various competitions will encourage amateur foodies to join in the action such as the Great Leamington Bake Off which invites keen bakers to enter cakes and have them judged by local chefs, Jenny Hudson, of Sweet As Cakes, Laura Hamilton, of Queans, and Peter Knibb, of Restaurant 23.

The Home Cook of the Year, which was launched in 2014 and is organised by Leamington butcher’s Aubrey Allan, also returns and the crown for Leamington’s finest amateur chef will be judged on a three course cooking challenge.

Children can also get their hands dirty and try cooking some scrumptious dishes at the kid’s cookery school, with sessions hosted by Gusto Restaurant, Nandos, Pizza Express and Yo! Sushi.

Ravinder Aujla, who runs a health food business ‘Pure & Raw’ which launched one year ago in Regent Street, is among the new businesses to join this year’s food and drink line-up for the first time.

She said: “Since we opened in Leamington, Pure & Raw has had such a warm welcome, so we are excited to be exhibiting at the Leamington’s Food and Drink Festival – it will help us to raise awareness of our offer not just in the town but to a wider audience too.

“Throughout the two days we’ll be offering a host of healthy smoothies and snacks. I’m on a mission to make Leamington Spa the healthiest town in the country, so the festival will be a great way to meet new people and to help them find out about the benefits of healthy eating so we can achieve it!”

Live music will return to the Royal Pump Room Gardens’ bandstand to entertain visitors.  New this year will be four piece acoustic band Behind the Settee and country music from Honky Tonk Rose, along with The Wap Waps, Tom Kirkpatrick and The Rock Bottoms who have been booked for repeat performances.